Charge-Driven Phase Separation between RNA and Proteins without Disorder 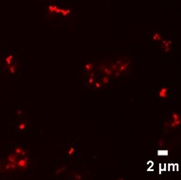 Phase separation of globular RNA and positively charged proteins is reported from a combination of coarse-grained simulations parametrized based on atomistic simulations, theory informed by the coarse-grained simulations, and experimental validation via confocal microscopy and FRET spectroscopy. Phase separation is found to depend on concentration, size, and charge of the proteins, requiring a minimum protein size, minimum protein charge, and minimum protein concentration before condensates can form. The general principle for phase separation is based on electrostatic complementarity rather than invoking polymer character as in most previous studies. Simulation results furthermore suggest that such phase separation may occur in heterogenous cellular environment, not just between tRNA and cellular proteins but also between ribosomes and proteins where there may be competition for positively charged proteins.